During online research of active shooters, terrorist attacks and hostage situations in schools, a Thesis paper from the Naval Postgraduate School in Monterey, California was located. The subject title was “Thesis on Homeland Security Planning for Urban Area Schools”, authored by Craig A. Gjelsten with a publication date of March 2008. Below are some of the pulled quotes that I found enlightening or interesting.

Introduction Section: Schools in the United States are at risk of a terrorist attack, and the country is unprepared. The recent history of terrorist attacks illustrates that the methodology and audacity of terrorists are evolving and increasing. Terrorists no longer differentiate between civilians and military personnel, nor do they discriminate amid gender and age. Terrorist attacks have already transpired at, or in close proximity to, schools in the U.S. and abroad, and are likely to continue and escalate.

Page 3: Most school districts will not increase budgets to enhance security measures, as security is not considered an essential priority. Unfortunately, only an attack on a school will change this mindset.

Page 11: The author argues that schools are vulnerable to terrorism for several reasons. Schools are obviously places where large numbers of children gather on a daily basis. Every day, 53 million children attend more than 119,000 public and private schools. Schools are essentially “in loco parentis,” which translates “in the place of the parent,” hence school officials have a special responsibility for the students’ care.

Page 29: Brad Thor, a member of the government’s analytic “red cell” unit formed after 9/11 believes that terrorists are currently targeting soft targets such as schools. Thor theorizes that an attack will come in the form of a coordinated attack across the country in multiple locations.

Page 45: Perhaps the single biggest factor in the lack of school security is apathy. A significant portion of the population lives under the shroud of “it can’t happen to me” or “it will never happen here.” The attacks of 9/11 proved that bad things can and will happen here. It is unfortunate that it often takes tragedy to cause realistic and logical concerns to be taken seriously. … A great deal of apathy also stems from taxpayer frustration. School district expenses account for the lion’s share of many people’s property taxes. People do not want to pay more taxes and in many cases vote against referendums necessary to keep schools financially solvent. Hypocritically, many of the same government spending watchdogs will be the first to point fingers and assign blame to school administrators when a tragedy does occur. Moreover, many school administrators do not feel any urgency and assign little priority to school security with respect to available budgets.

Why these pulled quotes? In our previous visits with schools officials (school board superintendents and members, principals and vice principals, SROs, teachers, and facility managers), we have heard several of these excuses as to why they are not exploring new ideas or their one (only) effort will address all of these concerns, such as “we getting an SRO soon” or “we are getting more cameras soon”. While both capabilities are needed, these alone will not provide the necessary protection level that the children need.

Redundant and overlapping security features, tactics, techniques and procedures must be in place before an event. Some will be bypassed or will fail but the others, only if in place, will provide the necessary delay, deterrence and protection to the children for survival.

Now, nine years later (after this concept has been published), after many more events have taken place, how much of these warnings been take to heart, and how effective has the effort has been to address these shortfalls? 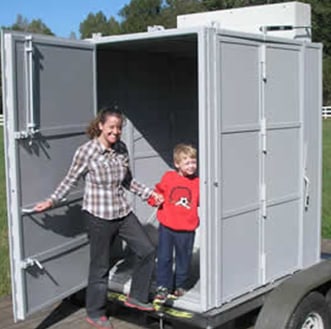